Brazilian Surfer Gabriel Medina is focused to compete in the final stage of the World Surf Tour (WCT), at Pipeline in Hawaii. Even shielded by coach and stepfather, Charles Saldanha, the Brazilian surfer has found time to flirt with Jessica Günter. The Rio model that is Olin Batista ex girlfriend, the son of billionaire Eike Batista, and Enzo Celulari, son of brazilian actors Edson Celulari and Claudia Raia.

The beautiful blonde with green eyes ended in early November a relationship with the last famous boyfriend and weeks later she exchanged messages in codes in Medina, but the “Medinetes” as Surfer fans are called, soon saw indications of a possible romance.

On November 29, Medina posted a picture with a wall graffiti in the background and put the caption “#j” with a little ant next to it, an emoticon that he always wears next to his name in the profile that Gabriel Medina keeps on Instagram. The letter would be the first of Jessica’s name. 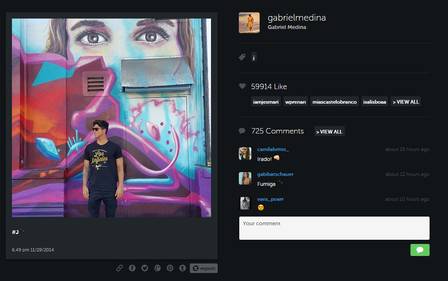 On the same day and exactly at the same time (6:49 a.m. of Brazil, but 22h49 in Hawaii), the model posted a picture on her Instagram back, with white blouse and red trousers, with the legend “#G” with a little ant. The letter would be the first name of Gabriel.

Also on 29, Jessica published another photo that received a comment from Gabriel Medina. All this happened while the surfer was in Hawaii, training for the WCT event, which begins on Monday, the 8th. The Pipeline stop of the World Surf Tour, the last of the season, will take place until the December 20th. Medina is the current leader of the world rankings with 56,550 points, followed by Fanning (53 100) and Slater (50,050). On Friday, the Brazilian dropped on the ranks in the quarter-final stage of Oahu (HAV) WQS, equivalent to the second division of the world of surfing, and worth the title of the Hawaiian Triple Crown. He used the contest as a heating test for the Pipeline contest.