Gilvandro Silva, a resident of the city of Parintins, 360 km from Manaus, in the state of Amazonas, was surprised to receive at home a stone in the place of a mobile device purchased through the website of the company Apple. The purchase of the iPhone 4S was made on March 3, and the package that should contain the phone arrived to the consumer on Friday, the 16th.

The product, amounting to R$ 2,599.00, would be a gift for his wife. “I bought the device to present my wife. When i received the package, i did not notice any difference and delivered it. When she opened, we were disappointed. There was a stone instead of an iPhone 4S” he said. 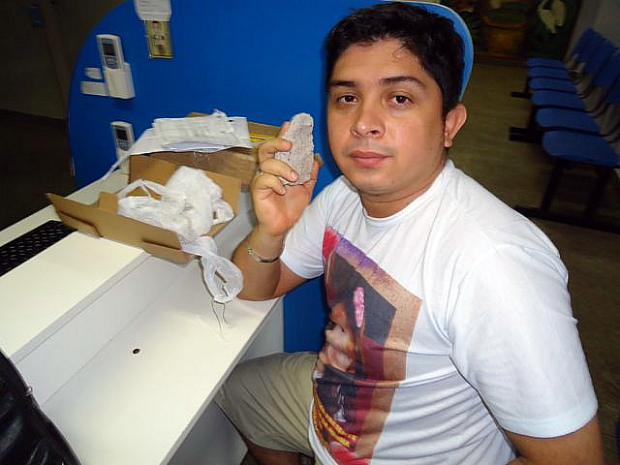 Gilvandro Silva shows the rock that he received from Apple

Silva went to the local Police to register a police report and told the news that he got in contact with company representatives in Brazil through the company’s customer service, available at Apple’s website. “They gave a deadline of ten days for the problem to be investigated and if proven to be misplaced handset, a new iPhone will be sent.”
For him, the problem occurred with the carrier that provides services to Apple in Brazil. “The company offered the option of returning the money or sending a new unit. I opted for the new device, I still want to give a gift to my wife,” he said.

He says he will wait the time given by the company. If not satisfied, he said he would go to court for his rights.
The G1 news service contacted the spokesperson for Apple, but the company said it would not comment on the case.