Justin Bieber’s concert in Rio de Janeiro is only on November 3rd, but Canadian singer’s fans are already camped out in front of the Apoteose Square, the Sambadrome, in downtown Rio. The teens were divided into 16 stalls early on Monday and plan to stay camped on the sidewalk until the day of the concert with a relay scheme: Each group spends six hours a day on site, to ensure that no one will take the tip and right to enter first in Apotheose, where they will demarcate territory along the stage to check closely the choreography and some playbacks. Another detail: between the camped there are minors. About 120 people participate in the vigil scheme. 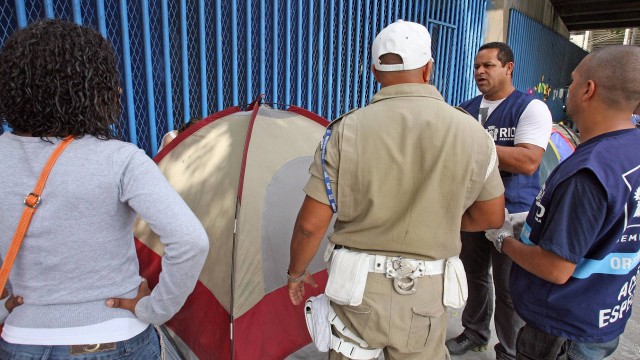 But the fans had to break camp the other day because municipal guards were in place and asked that the tents to be disarmed not to obstruct the passage of pedestrians on the sidewalk and according to them, the teenagers can continue at the site, but may only assemble the tents during the night. The group is still subject to bullying, for one detail: Justin Bieber will perform in Rio on november 3rd, but before that Black Sabath will play the same venue, commanded by the bats eater Ozzy Osborne and his fanatic and noisy group of followers.

A meeting with representatives of the Public Ministry of Rio de Janeiro and the Childhood and Youth decided for the removal of the underage youth who are camped there. In a statement, the prosecutor said he understands that the camp violates the rights of children and adolescents, who are “sleeping rough in precarious accommodation, missing classes and exams at school.” The prosecutor also pointed out the lack of “adequate structure for food and personal hygiene” on the camping site.

Despite the ban, Rio de Janeiro fans of Justin Bieber still camp outside the Sambadrome, waiting for the show as if nothing had happened.