A group of protesters who participated in the protest in Brasilia this thursday (20) set fire to the Palace of the Foreign Affairs to try to enter the building. The fire was contained but still the protesters tried to enter the site. The police managed to control the situation using gas, but several windows were broken. The group arrived at the palace after the police managed to disperse them from the front of the Congress.

The country is immersed in a protest that took a long time to start. But while there is evident dissatisfaction of the population, politicians are awfully silent and and seem not to exist. President Dilma published a video that says she supports the demonstration but at the same time prevented the video from receiving comments. Some mayors obeyed to the pressure from the streets, who initially protested against rising bus fares and brought down the price,  but are now finding that Brazilians want a lot more.

The Brazilians seek changes in all aspects of Brazilian politics, covered in corruption while immersed in inertia and incompetence. Inflation, violence and the economy go from bad to worse while the country pays one of the highest taxes in the world and has one of the highest costs of living because of that. The Brazilians are tired of being treated like silly. To top it off, despite all the problems, the Senate and the House of Representatives create and vote on projects totally unconnected with the country’s priorities and always favoring themselves. The latest is a law that prohibits the Public Prosecutors of investigating the politicians.

If I were you i would stay very far from Brazil right now, you might get hurt. Watch a few of the most impactful images of the Brazilian protests.
Now, with this many people on the streets and on a country that already is plagued with traffic jams in every little town, you can imagine the chaos that the country is in at the moment.

In Rio de janeiro, this thursday, police once again used of brutality to attack the protestors.

Even Rede Globo, the main brazilian tv station and media group decided to stop transmission of the famous brazillian soap operas to prioritize coverage of the protests taking place in cities across the country. According to a spokesperson for the broadcaster, the episode this Thursday of the Flor do Caribe soap opera has not aired.
Twitter users commented on the measure that caused dismay, many apparently surprised by the decision from Globo to prioritize the coverage of events by country. Globo is known in Brazil for being an elitist station that tries to manipulate and fake the real problems of the country.

In Salvador, FIFA buses were attacked with rocks this Thursday. 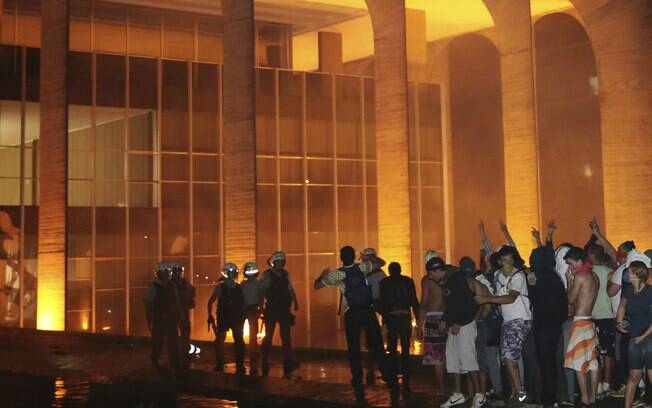 Police controls the protesters as they try to invade the Palácio

The Shock Troops of the Military Police invaded the emergence of a major hospital in Rio de Janeiro to attack the demonstrators and threw several bombs inside the emergence, doctors at the Hospital Municipal Souza Aguiar had to get in front and to prevent the invasion of rooms with people being met, were vehicles shock like a war. There is utter confusion in the region, no one enters or leaves.